Time to get serious

A cat may look at a queen, and almost meet a prince.

Wow, only 5 months between posts, this time. This commitment thing is improving. Have I been busy sewing? Well, no, not really. But that's about to change. I'm  going  back to the Gambia in TWELVE days and have NOTHING to wear. Most of my warm-weather (as in 35 degrees C)  clothes have mysteriously shrunk. So I'd better get a move on(or at least out of my PJs!).


I'm being a little economical with the actualite:
there was the Garden Party dress! I made it during a sewing weekend in Zeeland with Valerie (no blog) and Sigrid (oh yes, I can name drop with the best!)
The embroidered grey linen came from eBay and the pattern was B5317. 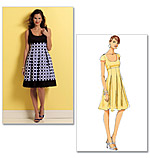 Now, I've made this dress twice before: once as an LBD as per pattern instructions with side zip. Nothing special, but nothing to complain about; the second incarnation was as my dress for the wedding whose bride I dressed. It turned out well too, even if I do say so!
That time I dispensed with the zip and it fit fine.
Plan A
Over-confident, I cut version three out in a windy, but sunny Zeeland garden - only needed to cut three skirt sections instead of two due to an unfortunate mishap with some diet coke. So I stitched, pressed, even did french seams (no overlocker handy - well, that's not really true, but I couldn't be bothered changing threads), tacked, pressed still more - didn't try it on, no not once, no need at all!  I even added extra length to the bodice, above AND below the bust darts. What could go wrong? I even tacked down  the box pleats of the skirt so they could remain sort of crisp before last-minute release on the big day.

Truth hurts
I was reluctant to try the finished article on before Valerie and Sigrid (flabby arm syndrome!), but gave in gracefully. Well, as gracefully as one can when trying to slip into a sausage casing with no zip! After a moment or three of deafening silence, there were a few mumbled Well, you have just got out of the shower and Once the pleats are released .... The dress was bundled away while I contemplated Plan B.
Plan B
Back home, I decided to remove one inch from the lower bodice. Aesthetics are important! This I, oh so carefully, did and reattached the skirt, only to realise that I had absent-mindedly removed that excess one inch from the top of the skirt instead. I don't like my skirts short (chubby leg syndrome), so couldn't fix my fix. Damn, damn, damn, I was just going to have to live with it.

Plan C
Plan C was to go to Marks and Sparks  in Edinburgh the day before the garden party, try on the smallest, tightest sookie-in (my sister's description) all-in-one foundation garment , I could possibly squeeze into and buy it one size smaller still. Breathing truly is overrated!

And it worked!
The dress fitted, apart from the bust darts being too low from the extra inch I had cleverly added to the upper bodice in the making. If only I had had safety pins handy to hitch up the bodice at the shoulders! I covered up the mess with a bright pink jacket and tottered down  the Royal Mile in my too high heels with my gorgeous daughter to meet the Queen. (Did I mention my habit of name-dropping?)
And did I meet the Queen? Well, no! I was in the wrong greeting avenue, but I did get to see Phil up close. I sort of hoped to hear him uttering one of his trade mark faux pas, but no luck - in fact, he was totally different to what I had expected, very kind even, though much shorter and more cadaverous-looking than I had been led to believe. Here's a glimpse of a Holyrood RGP (it's last year's but the clip for this year was not so descriptive).

How cool am I!
There was I, with DD2, rubbing shoulders and eating cucumber sandwiches with 7,000 of Scotland's great and good, in the beautiful grounds of Holyrood Palace, with Salisbury crags and Arthur's Seat close enough to touch. I had ARRIVED, but how I'd got there is another story.
Plan aborted; lessons learned
The plan had been for DD2 to make her own dress, despite a slight lack of sewing experience. After all, how hard could it be? Let me count the ways!
Firstly, she/we decided that there really was not enough time for her to make it, so I stepped in.
She chose from my  (cough) plentiful  adequate stash, a beautiful tealy-aqua fine wool, I'd been cosseting since PR Paris in 2009.  Do our children ever appreciate the sacrifices we make for them? Then she choose, from my similarly adequate pattern stash, a simple sheath/shift dress.
Then the fun started. Three muslins were made and refitted and over-fitted, as she requested More fitted! Tighter! Just take out a little more here, please!. Darts were extended and added and redrawn. A back waist seam was created to allow for sway-back adjustment and to straighten up the, by now, very squidgy grain line. At last, the muslin was declared to be just right. The dress was cut out, stitched up, tried on and immediately declared to be a wadder. There's only so much you can do with a pattern when it obviously didn't come anywhere nearly close to the vision in the wearer's mind's eye from the very beginning.
Reader, I bought her a dress in Princes Street and to my amazement,not only did she like it, but she actually WORE it (after taking it back to the shop and exchanging it for one size smaller - I so nearly got it right, for once!).
Well, I did declare in my blurb that I wanted to learn more and stretch myself as regards my sewing.It's safe to say that this experience served both those goals.